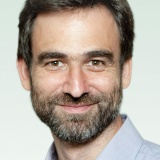 Dr. Alexandros Manolakis was born in Thessaloniki, Greece. After graduating from the University of Freiburg in Germany in 2002, he received his Dr. Med. Dent. degree from the University of Göttingen in Germany in 2003. He was a visiting associate professor in the Department of Periodontology at the University of Freiburg until 2004. After attending military service in Greece as a dentist, he maintains since 2006 a private practice specializing dental implants and aesthetic dentistry together with his brother, Kleanthis Manolakis, in Thessaloniki, Greece.

He is an official teaching mentor for different dental implant systems and he is giving hands-on courses with live-surgeries in implantology, soft-tissue-management, and bone management. Areas of special interest include Periodontal Micro-Surgery, Computer-Guided Implant Placement, Immediate Loading of Implants placed in the Edentulous Jaw, Applications of chairside CAD/CAM and 3D-Printing in Implantology.

He is a member of the European Academy of Esthetic Dentistry (EAED affiliate) and the Computer Aided Implantology (CAI) Academy.

Dr. Alexandros Manolakis is co-editor-in-chief of the greek journals Dentorama and Dental Journal.